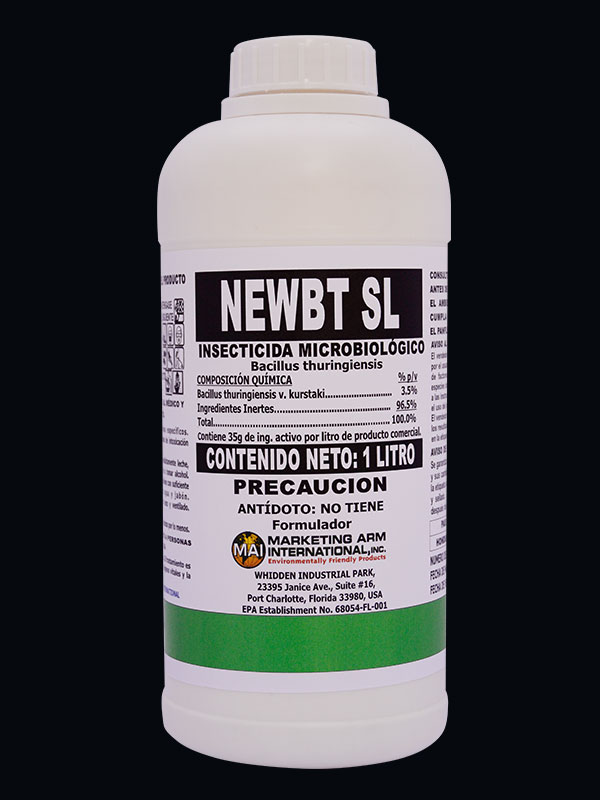 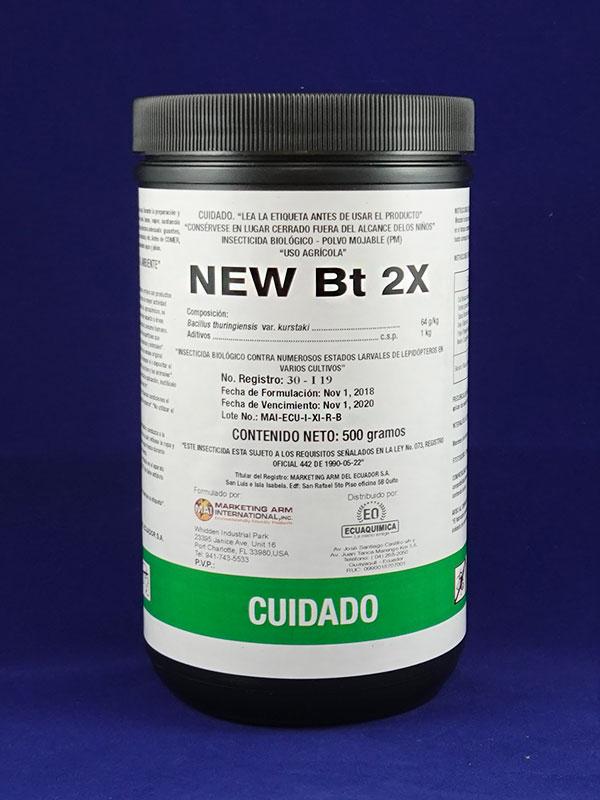 NEWBT is Environmental Friendly Biological Insecticide that is formulated as a Wettable Powder formulation (2X WP, 6.4 WP) and Liquid Suspension formulation (8L and 3.5 SL). The active ingredient of NEWBT is a potent biological insecticide based in the bacterium Bacillus thuringiensis v. kurstaki, a Gram-positive, soil dwelling bacterium that occurs naturally. NEWBT controls a wide spectrum of larva of the order Lepidoptera that feeds and causes damages on many crops around the world.

NEWBT has little or no effect on humans, wildlife, pollinators, and most other beneficial insects.

How does it works

The active ingredients of NEWBT are the spores and crystals produced by fermentation of the bacteria Bacillus thuringiensis v. Kurstaki. After spraying NEWBT on the plant foliage, the active ingredient is ingested by the Lepidopteran larva. Inside the larva, NEWBT destroys the gut cell walls and the spores germinate inside the insects. NEWBT Immediately paralyzes the feeding mechanisms of the insects and causes septicemia inside the larva. The larva dies due to septicemia.

The active ingredient of NEWBT is exempt of tolerance of residue in treated crops. Because it is environmentally safe, NEWBT is approved for Organic Cropping.

There is no pre-harvest interval, because the active ingredient is exempt from tolerance of residues. NEWBT can be sprayed the same day of harvest.

NEWBT can be used in the same frequency as other insecticides in a Pest Management Program (every 5-7 Days). To improve the Insecticidal performance of NEWBT, it is recommended to be used in combination with PH-PLUS.
PH-PLUS reduces the pH (4.5-5.5) and softens the water hardness (neutralizing carbonate salts) the spraying solution in the tank mix. Water Alkalinity and Water Hardness will make bacteria crystals biologically inactive.

Contact your local dealer or the regional Marketing Arm International Representatives. We look forward to assisting you!

This website uses cookies to improve your experience while you navigate through the website. Out of these cookies, the cookies that are categorized as necessary are stored on your browser as they are essential for the working of basic functionalities of the website. We also use third-party cookies that help us analyze and understand how you use this website. These cookies will be stored in your browser only with your consent. You also have the option to opt-out of these cookies. But opting out of some of these cookies may have an effect on your browsing experience.
Necessary Always Enabled
Necessary cookies are absolutely essential for the website to function properly. This category only includes cookies that ensures basic functionalities and security features of the website. These cookies do not store any personal information.
Non-necessary
Any cookies that may not be particularly necessary for the website to function and is used specifically to collect user personal data via analytics, ads, other embedded contents are termed as non-necessary cookies. It is mandatory to procure user consent prior to running these cookies on your website.
SAVE & ACCEPT